It is a rumor that Samsung galaxy y is upgradable to android 2.4.1.Users of galaxy y are reporting that they have got a fake message from their network providers about device upgrade.The message states that. 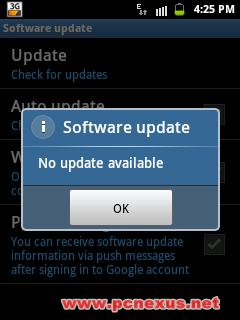 Actually this message is fake one and galaxy y is not upgradable to android 2.4.1.

No Further Updates For Galaxy Y
Samsung has confirmed that galaxy y is not further upgradable to android 4.0 or android 4.1 jellybean due to its low hardware specifications.So the message you got from  your network provider about galaxy y android os upgrade is a fake one because there is nothing like android 2.4.1 and Samsung has not made any official comments about galaxy y upgrade after a one time upgrade to android 2.3.6.

Due to great success of this device most users are asking for upgrading galaxy y to android 4.0 but hardware limitation is a bottleneck for this phone.So Samsung  has released galaxy young with android 4.1 jellybean out of the box which is an indication that galaxy y will not get any firmware updates further,but it may get some minor updates for bug fixes if they occur.

Minor Official Update For Galaxy Y
However Samsung rolled out a minor update for galaxy y which is GINGERBREAD.DDMD1.You can update your galaxy y with samsung kies.This new update just contains some bug fixes and there is nothing new in the new firmware.

The above firmware details is the latest android version for galaxy y s5360. Also the DDMD1 firmware has various bugs in it that you can check here