The wait is over Samsung has officially released the android 4.1.2 jellybean update for galaxy s advance I9070.Previously the galaxy s advance was only upgradable to android 4.0 ice cream sandwich and I also wrote a tutorial about manually updating it to jellybean 4.1.2 with the official Samsung ROM that was released in Russia.But Indian users now don’t need to update it manually and they can easily update their galaxy s advance to latest firmware by using Samsung KIES or OTP. 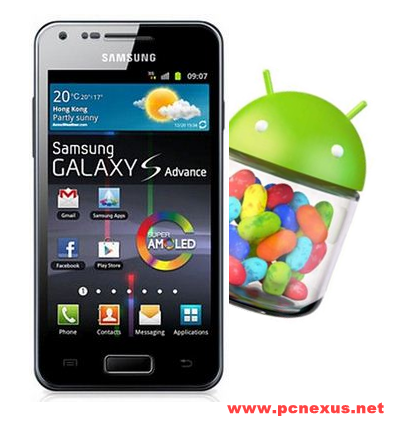 This phone was coming with android 2.3 gingerbread out of the box but due to decent specification of hardware it deserved to receive a jellybean 4.1.2 update.Galaxy s advance has a dual core processor,768 MB RAM,MALI 400MP GPU,Super AMOLED screen,HD video recording and an internal memory of 16 GB.If the jellybean update for galaxy s advance is not yet available in your country then you can check this tutorial.

Whats New In The Jellybean Update


Samsung Galaxy S Advance Price Issues
Recently Samsung has reduced the price of this phone to 14500 INR but at different places this phone is selling at a huge price difference.The old stock of this phone is still coming at a variable price of 18500 INR,23000 INR.These two prices are for the older stocks of this phone.However the new stock phones are available at 14500 INR.You should be careful about this that not to buy this phone from the older stock because it is priced very high.Why you should pay more for the same thing that is available at a very affordable price.