December 22, 2015  moto g3  2 comments
Motorola Moto G Turbo is the upgraded version of the Moto G 3rd Generation android smartphone. Moto G 2015 was launched in July 2015 while the Turbo Edition has been recently launched on 10th Dec 2015. Both these android smartphones are exactly same in appearance and most hardware specs. The Moto G Turbo now packs an octa-core CPU with turbocharging support. The device can be charged to give 6 hours of backup in just 15 minutes as said by Motorola. With the launch of Moto G Turbo edition, Motorola has left many android users in a confusing state. They are unable to decide which phone to choose between the two. This post will tell you whether you should buy or upgrade to Moto G Turbo edition or not. 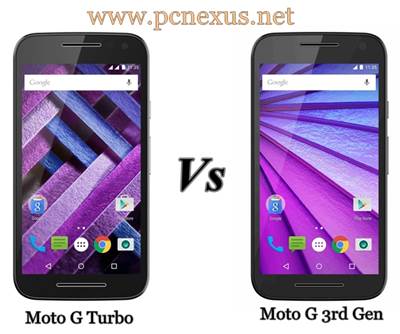 Moto G 3rd Generation vs Moto G Turbo Edition: Which Should You Buy?

Well gaming on the Moto G Turbo is definitely better than regular model. But gaming on the Moto G 2015 is also very good. You can use any of the two and see that there are no lags in gaming. Moto G 3rd generation is capable of running any android game without lags. So only consider the newer Turbo Edition if you are a hardcore gamer and want slightly good performance in android gaming.

Upgrading from the regular version to the turbo version for this reason is not at all a wise decision. The snapdragon 615 chipset features an octa-core CPU with Adreno 405 GPU, so heating issues can be felt on the screen and the back panel while gaming or using Wi-Fi for longer times.

The regular and the turbo version of Moto G share a set of same hardware specifications that are listed below.

The Turbo Edition model has some unique features that can not be found in the regular version. The list is stated below.

The only solid reason that makes me buy this phone is the not much price difference between the regular and turbo edition which is just $22 dollars (INR 1500). So, caring not much about $22 dollars, I would prefer Moto G Turbo. Because it is coming with an octa-core cpu, Adreno 405 GPU, turbocharging support and IP67 certification.

Is Turbocharging, Upgraded CPU/GPU And IP67 Certification A Reason To Buy Or Upgrade To Moto G Turbo

No, above-mentioned features are not at all solid reasons to buy this phone. You can read more below.

If you are the owner of a regular Moto G3 and planning to upgrade to Moto G Turbo then this is not a wise decision. Because Moto G Turbo is just another Moto G3 with mild changes. It doesn't have full HD display, a 5GHz Wi-Fi support, an upgraded battery, nearly all hardware specs are same except the CPU and GPU. The turbocharging and dust resistance feature are not much useful for an advanced user.

Moto G Turbo Edition is overall a good phone with an upgraded Snapdragon 615 chipset, turbocharging and IP67 certification. So, if this phone is going to be your new phone then spending additional $22 dollars, for it is a good idea. But people who are already using Moto G3 will not experience much difference, so it is better not to upgrade.

If you have any questions then you can ask via comments.