Farm Invasion USA is an android game in which your corn farms are invaded by the aliens.You have to destroy all the aliens before they turn your farms in popcorn and ruin them.In this game you have a vehicle which is known as alien chopper through which you harvest your farm fields and chops the alien before they ruin your corn fields.Also while running the alien chopper you can fire at them through the shotgun provided to you.During the gameplay you can collect many powers like alien chopper boost mode,gun powers etc.

It’s been a peaceful day in Texas, with the sun burning down its last rays on Redneck Pops and his two sons Joe and Otis, counting the harvested corn on their porch.When suddenly unknown flying objects are landing and hoggish blue noses start frying fresh corn to make popcorn of it.Reasons enough to welcome the new visitors the Earthling way.Help the two brothers Joe and Otis, get a shotgun, the deadly rocket launcher or a hunting rifle and start the engine of the family’s heirloom, the mighty corn chopper.Race down the fields and banish the popcorn raiders with the sharp blades of your thresher.Use aimed shots to get down their spaceships and avoid obstacles on the field to collect the remaining corn.The craziest invasion of the third kind has just begun. 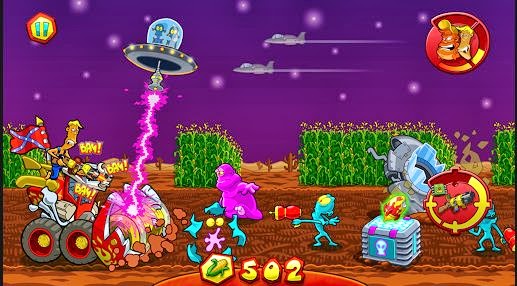 Its your farm so protect it from aliens otherwise they will turn your farm into a popcorn field and all your hard work will go in vain.Download the apk from above link and enjoy.