How To Install Flash Player On Samsung Galaxy S7

March 03, 2016  galaxy s7  No comments
Galaxy S7 is the latest flagship device from Samsung which was recently launched at the Mobile World Congress, Barcelona 2016. It has two variants the other being the Galaxy S7 Edge. Samsung has given several improvements over its predecessor. The hardware is backed by Qualcomm Snapdragon 820 an octa-core CPU with 4 GB of RAM. The inbuilt storage is 32/64 GB which can be further expanded to 200 GB. This time Samsung has focused on Dual-Pixel camera instead of increasing the mega-pixels. Also the camera aperture is f/1.7 which is good for low light photography. With an octa-core CPU the phone will heat during gaming, so reduce overheating Samsung has fitted a water cooling system underneath the battery.

The phone runs android 6.0 Marshmallow and doesn't support the 'Adaptive Storage' feature from the OS. This meas that you can not the use the 'SD card' as internal storage on a Galaxy S7 smartphone. These were some quick specs of Galaxy S7. In this tutorial we will talk about installing flash player on Galaxy S7 and Galaxy S7 Edge.

What Actually Is Flash Player


Flash Player is a plugin for android web browsers which deliver interactive content in the browser window. This content can be a video or flash games (.SWF). Previously we were using Adobe Flash Player APK to install it on Samsung smartphones. This app worked for most phones but Adobe pulled its support from the android's flash plugin in 2011. Since then no improvements have been made to it. The app has now become obsolete and is more vulnerable to security risks. 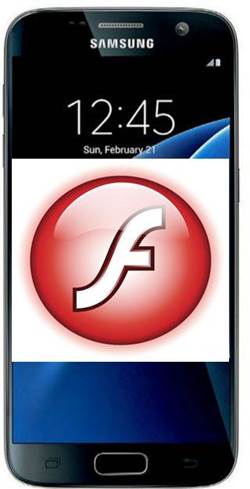 As the smartphones are advancing in technology day by day, the need for flash plugin is also diminishing. Today we have web browsers for android that have inbuilt flash player support. These web browsers include Mozilla Firefox, Puffin Web browser and the dolphin web browser. You can play flash videos and run SWF games in these browsers.

How To Install Flash Player On Galaxy S7


You can install any of the below listed browser for android and enjoy flash content on your Galaxy S7/S7 Edge.


To enable flash plugin just head to 'Settings' and find the flash player settings. You may find two options 'On-Demand' or 'Always Active'. For enabling this plugin in puffin browser go to 'Settings>Data Savings'. Here tap the 'Customize' tab and enable 'Flash on Demand'. Use the slider to adjust the 'Flash quality'. The process is similar for other browsers also.