What Mobile Developers Have In Their Minds All The Time

September 09, 2014  android  No comments
The trend of mobile apps development is at the peak level. Every businessman is running to hire a creative and unique mobile app developer for their business but has anybody ever wondered what all is going through a mobile app developer for designing best quality apps which is different from all other? There are a hell lot of things that are going into a developer’s mind and they have to keep themselves updated with every new thing in their mobile world. 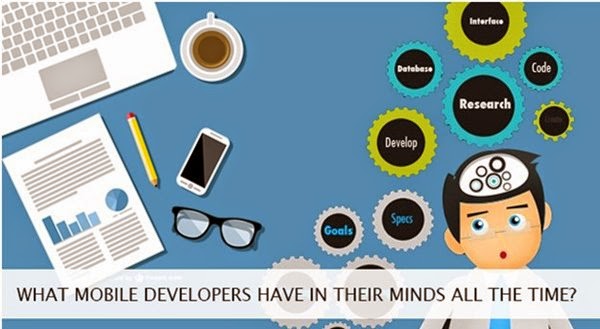 The job is not at all easy, though it looks very simple. Creating, designing and framing logic needs a lot of efforts and skills. Your experience and your outlook to the world and new things can only help you in designing the best. Let us have a look at what all a mobile app developer have in his/her mind that makes them in their competing spirit always.

If the mobile developer is an iOS developer and is dealing with iPhone, then Swift and the iBeacon are the two things that they must have been working with.

Swift: This new language by Apple is a big change in the working ways of iOS. The barrier towards the entry into iOS and Mac programming has gone a little high because of its objective C. Objective-C is something really of one of a kind. No developer can find an easy way as an alternate to C++ to objective C or Java to Objective C. But this new language is completely different from all these. Swift is much closer to Java therefore the programmers with Java background can enter the iOS field.

iBeacon: This was released when the new update of iOS 7 was introduced. This new Bluetooth feature offers you various possibilities for providing you proximity based content. There is something really exciting stuff that is happening with all the proximity based stuff. These devices are so fast that they are even capable of having 3D content.

June 26, 2014, Google launched Android L for the developers of Nexus 5 and Nexus 7. It is believed to be working on 5,000 new APIs for a new design. Google has given a kind of different attitude in terms of its user interface and they have realized it to take more of its ownership. With Android L you can enjoy a colourful and depth based and shadow based interface and this gives us an idea that Apple seems to be going in some other direction moving more towards the flat look.

Wearable Technology : Despite of some useful efforts that Apple and Samsung have made, Google is making its way towards the wearable technology. The company has introduced a number of smartwatches at Google, though their first reviews describe them as rough drafts.
Every mobile app developer is going through something in their mind and every time they have to fight for something to make something new. The technology is evolving every now and then and there is something exciting every time to work with.

About The Author: Being a well-talented App developer& blogger from App Xperts, Macy Jones provides her readers with the best tips on App Development. She also likes to share her knowledge by writing various blogs and articles for contributing her ideas and quality write-ups to the other websites. Join Her At Google+ And Facebook.