June 14, 2013  android  No comments
Samsung Galaxy Tab 2 7.0 Vs Galaxy Tab 3 7.0 Full Review Samsung Galaxy tab 2 7.0 was launched in February 2012 and since then this android tablet has got good market response.The galaxy tab 2 is currently available in two models P3100 and P3110.The P3100 version has voice calling facility which means that you can make voice calls over cellular network while in P3110 there is no such facility and its the wifi only version.The hardware and software specifications of both these android tablets are same. 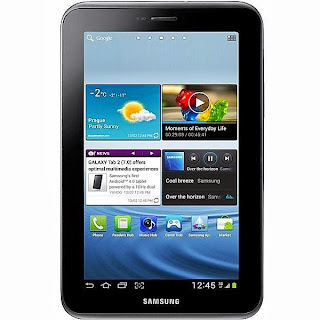 We will review the galaxy tab 2 in following domains including the cpu,gpu,ram,storage and screen.

1.CPU : The galaxy tab 2 GT-P3100 and GT-P3110 have a 1 GHz dual core cortex A9 processor which is double in cpu speed and performance than any single core cpu android smartphone.A dual core cpu is best at handling heavy android games because 2 cpu cores can do the work much faster and efficiently.This android tablet doesn't lag during gameplay.

2.RAM : The galaxy tab 2 has 1 GB of RAM,out of which 750 MB is user available and rest is system reserved.750 MB of RAM is enough to run almost any android app or heavy android games.You will never fall short of RAM on this tablet.

3.GPU : The graphics of galaxy tab 2 is powered by PowerVRSGX540 GPU which is an adavnced GPU much better than adreno 200 (found in low end android phones).The PowerVRSGX540 GPU is good at 3D rendering on android,and it can handle HD videos also.So in this price range this GPU is more than enough for any serious android gamer because it has the tendency to run almost any android game.

4.Storage : It has inbuilt storage of 8GB or 16 GB.Both versions are available in 8 GB or 16 GB variants.If you have the 16 GB version then 11.5 GB is user available.So storage is big enough on this android tablet and is expandable upto 32 GB through a micro sd card.

5.OS : The galaxy tab 2 runs on android 4.1.2 jellybean.You won't get features like multiwindow but still the android jellybean looks good and runs very smooth on this tablet.The android 4.2.2 update for galaxy tab 2 will come soon.

6.Screen And Camera : This android tablet features a 7 inch PLS LCD capacitive touchscreen with a resolution of 1024x600 pixels and pixel density of 170 ppi.We can play HD videos on this tablet.But the galaxy tab 2 doesn't play most mp4 movies,so for this use MX player app.The screen isfairly vibrant and you won't see pixels unless you bring your eyes very close to the screen.But with 16 M colors display the screen looks good and capacitive touch is very responsive.

The galaxy tab 2 has 2 cameras.Primary camera is 3.15 MP without LED flash and record HD videos at 720p HD while the secondary camera is VGA.

Galaxy tab 3 7.0 is recently launched in two variants P3200 and P3210.The P3200 model is the 3G and cellular version while the P3110 is the wifi only version.The features of galaxy tab 3 are similar to galaxy tab 2 but few of them are not officially confirmed.Lets check some of it main specifications.

1.CPU : The galaxy tab 3 features a 1.2 GHz dual core processor which is better than its predecessor galaxy tab 2.It is slightly faster in cpu speed.

2.RAM : The galaxy tab 3 also has 1 GB of RAM.So there is not much difference between the two competitors.

3.GPU : The GPU of galaxy tab 3 P3200 and P3210 is not yet officially confirmed.Some sources say that is has a Vivante GC1000 Core GPU which will provide double the performance than galaxy tab 2.Some sources say that it has MALI 400 MP3 GPU but it may not be true because its specifications at GSMArena doesn't show any GPU information.So to get the correct information you should wait till its release.A benchmark release of this tablet will clear all doubts about the GPU.

4.Camera : It has a 3.15 MP primary camera and 1.3 MP secondary without any LED flash.But GSMArena says it has LED flash but we didn't find any LED flash in the pictures provided by GSMArena.

5.Screen : The screen is just normal tft with 16 M colors,1024x600 pixels resolution and 170 ppi pixel density with no PLS LCD technology as in galaxy tab 2.So we can't say whether its screen is as bright as galaxy tab 2.

If you are looking for a branded budget android tablet then the galaxy tab 2 is the best choice right now.Also don't buy the 3G version of this tablet if you are just buying it for gaming because the P3110 wifi version has same specification except the voice call facility and 3G.For the 3G version of this tablet you need to pay around $104 more however both versions of galaxy tab 2 has same hardware and software specifications.So make your decision wisely.

If you want to wait for the release of galaxy tab 3 then this is also a good choice for you because on its release you will know everything about it.The galaxy tab 3 would be better option if it will have a Vivante GC1000 Core GPU or MALI 400 MP3 GPU,a brighter screen display and a camera with LED flash.The price of galaxy tab 3 is not yet officially confirmed,so if you want to make the best choice between these android tablets then you should wait for some time.