May 22, 2017  wannacry, windows  No comments
The world is now facing the biggest cyberattack known as the WannaCry ransomware. The WannaCry Ransomware has affected more than 2,00,000 computers worldwide. The WannaCry ransomware targets the computers running the outdated Microsoft Windows operating systems like the Windows XP, Windows Server 2003, Windows 7/8. After getting in a computer this malware first tries to connect to a domain name which is hard coded in its source code. If the domain name is not found then it encrypts the entire hard drive and asks for ransom from the victims. This domain name actually acted as a kill switch and was discovered and registered by Marcus Hutchins of malwaretech. This kill switch greatly reduced the spread of this malware.

Before the WannaCry cyberattack, Microsoft patched the vulnerability in its Windows 10 OS by releasing a critical software update known as MS17-010 in March 2017. At that time MS17-010 was not released for other Windows OS'. After the WannaCry ransomware attack, Microsoft aggressively released security updates for all its Windows operating systems including the Windows XP whose support was ended by Microsoft in April 2014.

The MS17-010 is your computer's first defense to prevent the WannaCry ransomware attack. If you haven't installed this security update then find this post useful as we are going to teach you how to install this patch either via Windows update or standalone update package. Read upgrade to Windows 10 for free.

Now after installing the security patch update make sure to scan your PC with a good antivirus. We suggest you buy Avast Internet Security 2017 because it detects, blocks and remove all malware strains of WannaCry ransomware including WNCRY, WCRY and Wana Decryptor 2.0. If you are still using Windows defender then I must tell you that Windows defender is unable to defend your computer against WannaCry. You can install Avast Internet Security 2017 which comes with a 30-day trial. Avast is the only antivirus which provides the highest security against WannaCry and DoublePulsar. Below you can find a screenshot in which Avast antivirus blocked the WannaCry virus. 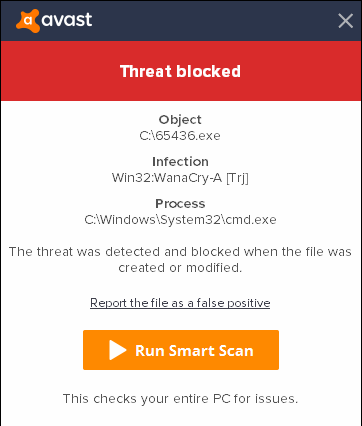 If you have any questions then you can ask via comments. If you liked the article then take two minutes to share it.