May 09, 2016  android, samsung  No comments
Today 9th May 2016, Samsung has finally launched the Galaxy J5 and Galaxy J7. Both these phones are currently running android 6.0.1 Marshmallow out of the box. The Samsung Galaxy J series of smartphones is quite popular in mid segment android smartphones. The J series provide some unique features like the Bike Mode which was recently launched with Galaxy J3 now it is also available on the Galaxy J5 and Galaxy J7 2016 models. Both these android smartphones are selfie oriented phones which provide a front facing LED flash for better selfies in low light or even complete dark. Both these latest cell phones have a metal frame that was not a part of the previous generations J5 and J7. 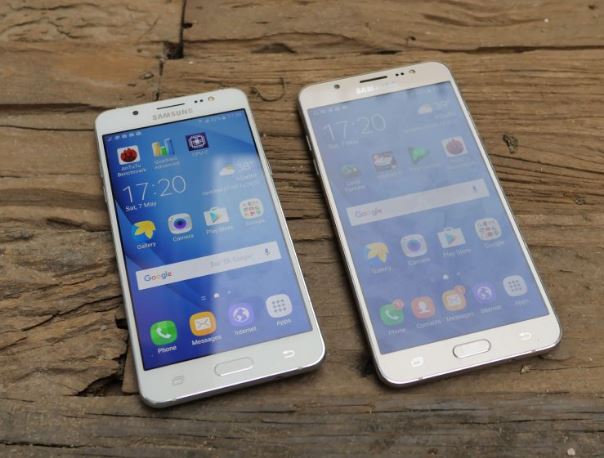 The Galaxy J5 2016 model has got a new design this time with a metal bezel. The design is okay to attract buyers who want to invest their money in mid range android smartphones. However there is no Gorilla glass finish at the back and the phone is not water or dust proof.

The basic specifications of the Galaxy J5 6 include a Qualcomm  MSM8916 Snapdragon 410 with 1.2 GHz quad-core CPU and adreno 306 GPU. If we talk about the chipset then I can say that the Qualcomm 410 in Galaxy J5 is outdated and we can't expect flawless performance from this phone. We will expect lags at some point whether it is browsing or gaming.

The Galaxy J5 2016 has 2 GB RAM which was previously 1.5 GB in the 2015 version. The screen has got improvements in terms of size only. Now Galaxy J5 features a 5.2 inches HD (1280 x 720) screen with 282 PPI. The screen uses super amoled technology so it over saturates the colors to make them look more vivid and bright. However absence of a 1080p display is very disappointing. The 13 MP rear camera is an average camera that can be found in most android smartphones today. You can take better selfies with a 5 MP front facing camera with LED flash.

J5 2016 has a bigger 3100 mAh battery which can easily last for more than a day. There is no fast charging support. The phone runs on android 6.0.1 Marshmallow out of the box with Samsung touchwiz UI. The Samsung UI provides built in Samsung apps and software features like ultra power saving and ultra data saving mode.

Now rest all the basic specifications of J5 2016 are completely inherited from its predecessor.

Samsung launched the J7 in China which was having a Full HD 1080p display. But the 2016 J7 Indian version again features a HD display 720 x 1280 pixels. This is such a disappointment for a 5.5 inch screen. But since its a mid ranger then we can't expect much either in hardware specs or performance.

The internal storage is 16 Gb and can be further expanded to 128 GB via microsd cards. J7 also supports bike mode. If you talk about other specifications then they are exactly the same as that of its predecessor.

If you compare the spec sheet of both these phones from there previous models then you will not find much improvements. Here slight improvements can be seen only in design, RAM, android OS and J7's chipset. So you can see both these newly launched Samsung phones do not feature a Full HD display and most of the specifications are same.

From the price point of view both these Galaxy J series smartphones are overpriced. Consider Galaxy J7 which costs around 15,990 INR and doesn't have a Full HD screen or 4K video recording support. Both J5 and J7 don't support dual band Wi-Fi which is extremely useful to work with 5 GHz Wi-Fi networks which gets fewer disconnects and better reliability.

If you are still unable to decide whether to buy either of this phone or not then you should wait for the official launch of Moto G4 and Moto G4 Plus in India.