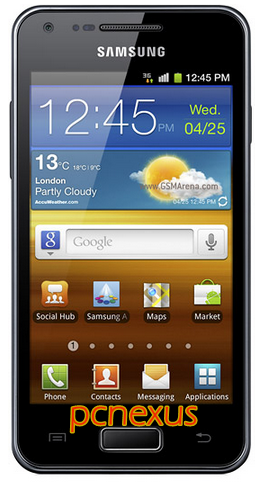 Samsung Galaxy S Advance I9070 Price Dropped Now Available At Affordable Price Samsung Galaxy S Advance I9070 also known as Samsung galaxy S2 lite is a galaxy s series android smartphone launched in April 2012 with a price tag of 26000 Rupees/480 US Dollars.But now it is available for just Rupees 14500/267 US Dollars.Samsung galaxy s advance has encountered a great price drop in just one year.Now question arises why Samsung reduced the price of this android smartphone.

Samsung is already working on galaxy S4 and also the price of galaxy S3 is reduced.You can see that there are a number of android phones available in the market around 15000 Rupees/277 US Dollars but no one can be called as a perfect android phone in this price range.Samsung might have reduced the price of galaxy s advance to give tough competition to all android smartphones in this price range.

Why Galaxy S Advance Is No. 1 Contender At 15000 Rupees/277 US Dollars
The above statement is absolutely true making this phone a worth of money and it will totally present you an awesome android experience,no matter if you are a beginner.At this price range you are getting a decent specification of hardware and of course upgradation to official android 4.1.2 Jellybean.Samsung has already released the android 4.1.2 Jellybean update in Russia and it will be available soon in your country.You can update it via KIES.Lets check some of its features and specifications that makes it the no. 1 smartphone in price range of 15000 Rupees/277 US Dollars.

1.1 GHz Dual Core Processor : A processor is the most important part of any android smartphone because it handles all the work.With a 1 GHz dual core ARM cortex A9 processor everything will be fast and fluidic on galaxy s advance.A dual core 1 GHz processor can handle intense gaming on the device.Galaxy s advance has 768 MB RAM which is enough for smooth working of the device without lags and hangs.This powerful combination of 768 MB RAM and 1 GHz dual core processor is ideal for faster and multitasking performance without lags.

2.MALI 400MP Graphics : If you are a gamer then galaxy s advance’s MALI 400MP graphics will turn you into an android gamer.MALI 400MP is currently can be found in expensive android phones like galaxy S3.The MALI 400MP GPU has 4 cores which supports OpenGL 1.1 and 2.0 so suitable for almost any android game available on google play store.

Conclusion : Most android smartphones in this price range comes with Adreno 200 graphics.Adreno 200 is not suitable for heavy android games and it doesn’t perform well during a serious gameplay on android.The Adreno 200 GPU is mostly found with android phones having a single core processor.The MALI 400MP is found with dual core processors.

3.Super AMOLED Touchscreen : Super AMOLED is Samsung's term for an AMOLED display with an integrated digitizer, meaning that the layer that detects touch is integrated into the screen, rather than overlaid on top of it. According to Samsung, Super AMOLED reflects 5 times less sunlight compared to the first generation AMOLED.The display technology itself is not changed. Super AMOLED is part of the Pentile Matrix Family. It is sometimes abbreviated SAMOLED.It is the same touchscreen technology that can be found in galaxy s3.The only difference is between is ppi.Galaxy s3 has 306 ppi with a larger screen  and galaxy s advance has 233 ppi with a smaller screen.

Conclusion : At this price range no other phone has super AMOLED display.Super AMOLED display is capable of displaying bright images and videos.You can find some impressive screen displays like in Sony smartphone’s with bravia engine but you will see the difference between them when you actually see them.Super AMOLED is better than LCD.

Cons
No cons at all.

After reading the above article you are now able to decide whether to buy or not to buy this android smartphone.