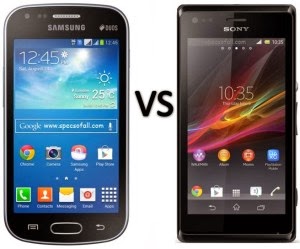 2. GPU : Sony Xperia M Dual has Adreno 305 graphics which is better than Galaxy S Duos 2’s Broadcom Videocore IV graphics. Sony Xperia M Dual is playstation certified Sony smart phone so you can enjoy playstation android games on your xperia M while Galaxy S duos 2 has no such certification. The GPU of galaxy s duos 2 will perform slightly better than its previous version but you may encounter several lags and glitches while gaming if you install many apps on galaxy s duos. While gaming is smooth on Xperia M Dual.
The Xperia M Dual has a gpu score of 4981 in AnTuTu benchmark while Galaxy S Duos 2 only scores 4644. So xperia M is a winner in case of gpu comparison.

3. RAM : Sony xperia M has 1 GB RAM while Galaxy S Duos 2 has only 768 MB of RAM. So it is clearly visible that xperia M dual has more RAM than galaxy s duos 2. So xperia m dual can do multitasking easily as compared to galaxy s duos 2. Having a 1 GB RAM is also good for gaming as playing any game will not give you lags. Games like dead trigger, nfs most wanted, temple run 2, subway surfers will run smoothly on Sony xperia M dual while these games have a low performance on Samsung’s galaxy s duos 2 as compared with Xperia M dual. Also galaxy s duos 2 identifies only 2 finger touches which is sometimes less to play games which require at least 3 simultaneous touches. On the other hand Sony xperia M identifies 5 finger touches which is enough to play any android game.

6. NFC : NFC or android beam is a premium feature which can be seen in phones like Galaxy S3. With NFC you can share data very fast by placing two NFC enabled phones back to back. Sony is giving this feature in Xperia M dual at a low price. No other android smart phone have this feature in this price group ($209). Galaxy S Duos 2 also missing this feature.

8. Dual Band WiFi : Xperia M dual has dual band WiFi (a/b/g/n) which means it can work with 2 wifi frequencies while galaxy s duos 2 has only single band wifi (b/g/n) and can only work with single wifi frequency.


Verdict : According to the above comparison Sony Xperia M Dual comes out to be a winner. The previous version Galaxy S Duos has a very bad performance, it hangs a lot as experienced by its users. You can check the problems faced by S duos users in comments sections on this post. So if you previously had Galaxy S Duos then you definitely don’t want to buy Galaxy S Duos 2 with slight upgrades just to lure you and make you fool. Only the price is a issue for most smart phone owners, Sony Xperia M dual is Rupees 2000 more expensive than Galaxy S duos 2. If you do not have the price issue then opt for Sony Xperia M dual with good specifications and great performance.