How To Build A Laptop Cooling Fan At Home

December 23, 2013  hardware  No comments
A laptop cooler is a fan which provides fresh air to your laptops internal parts through its air vents to keep it cooler. A laptop or a notebook needs fresh air to operate at optimal temperature and prevent overheating. The laptop gets the fresh air from the air vents located at its bottom. These air vents should never be blocked. A laptop, notebook or an ultrabook will require a laptop cooler when you mostly use it for playing games for longer times or run applications that make heavy usage of cpu and gpu thereby making the motherboard components even hotter.

Ageing laptops also require laptop cooling fans because the thermal grease of cpu and gpu dries up over time and the notebook requires some other ways of cooling. In this tutorial I will teach you to build a homemade laptop cooler that will have its own power source and will not operate on your laptop’s usb power, also it will prove better than any cooler master cooling fan that are useless and expensive.

Note : If you use cooler master cooling fan then it will operate on usb power and acquire one usb port of your laptop completely, but it also has a female usb connector in which you can connect other usb devices. That means you are using two usb devices in one usb port, according to me this is usb overloading and make the usb module hotter when more current is drawn from it. So whats the use of cooling if the laptop cooler is making your laptop hotter. Also these laptop cooling fans will drain the laptop’s battery quickly.

On the other hand my home built laptop cooler will get its power from Nokia cell phone charger and doesn’t require USB power so you can use this laptop cooling fan even when you are running your notebook on battery power.

Things You Will Need Step 1. Choose A Right Box Or Build One Yourself
First of all measure the length and breadth of your laptop and choose a box accordingly so that your laptop can rest on it completely. If however you are unable to find the right sized box then you can create one. Just gather some cardboard pieces and make a cuboid box whose one face is open. Join the box joints with glue and finally cover them with newspaper pieces soaked in glue and water mixture. Let the box to dry overnight. Next day the box will become very hard. The box height should be 4 inches and length should be according to laptop size. See the pic below 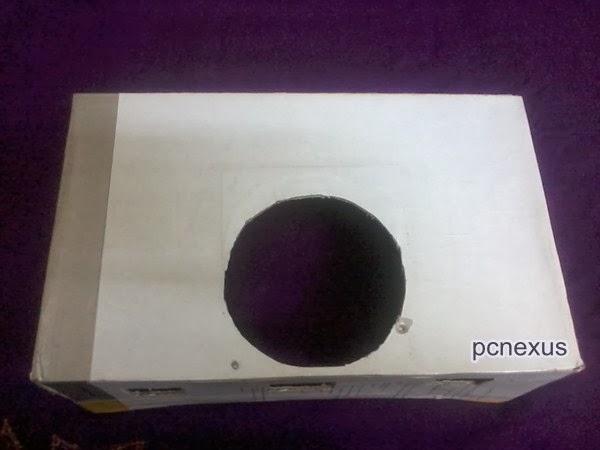 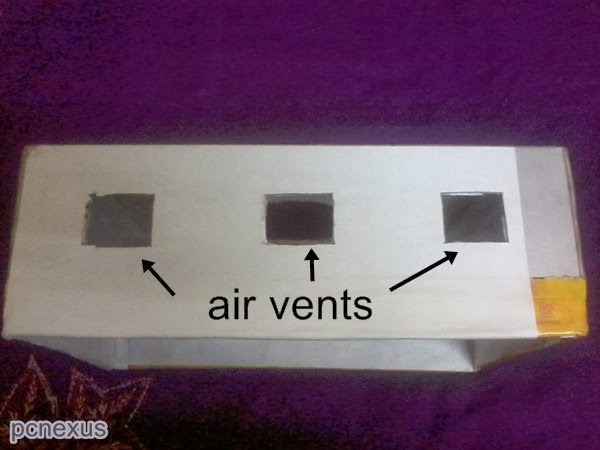 Make air vents on both side of the box. For this you have to cut square windows in the box parallel to each other. Make only 3 air vents at each size. Now cut a circle on top the box for the 120 mm fan as shown in the pic above.

Step 2. Place The Fan On Right Place
Now after cutting all pieces, place the fan inside the box. The fan should be placed so that it will throw air up and not suck air from laptop vents which is dangerous. See the pic below how I screwed and fixed the fan correctly. If you have another fan then you can do the same as above for it to fix it on place. But this part is optional. The box after fixing two fans will look as follows. 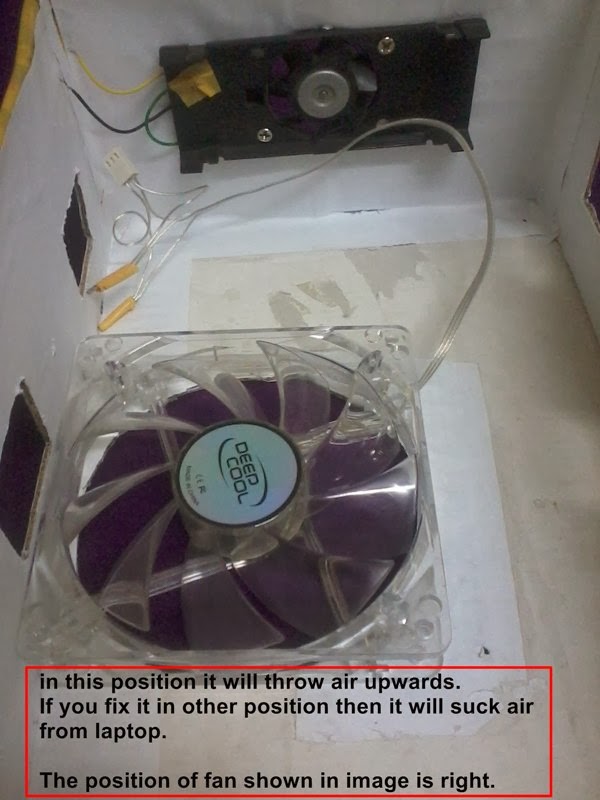 
Step 4. Connections
The fan and the cell phone charger both have two wires one is neutral and other is live. You have to connect the live wire of charger to live wire of fan and neutral wire of charger to neutral wire of fan. Now insert the charger in power outlet and check whether fan is working or not. If fan doesn’t start then you have mixed the neutral, live connections. Re-connect the wires and again check whether fan is working. Repeat the steps until fan starts to work. Secure the wire connections with electrical tape. See the pic below that the fan is working and the red LED is glowing. 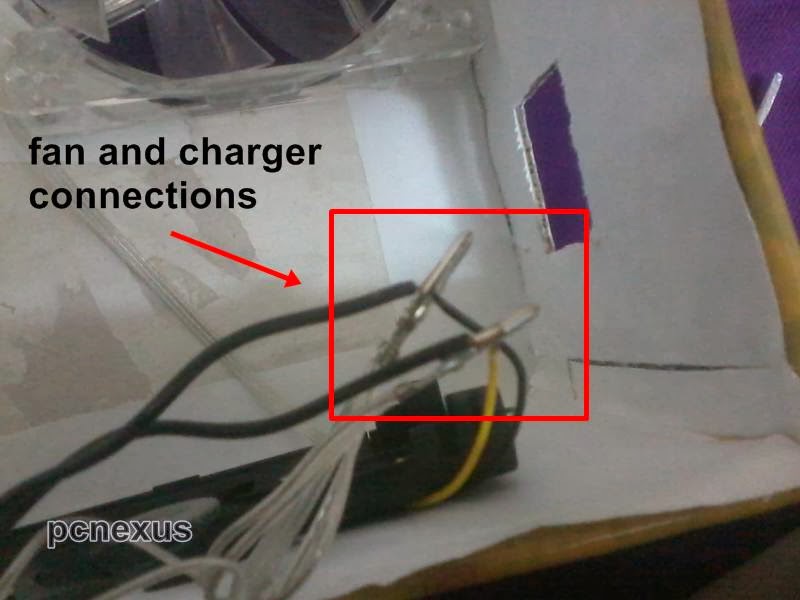 Final Product
The final product will look as follows. This is the inside view of the laptop cooling fan box. 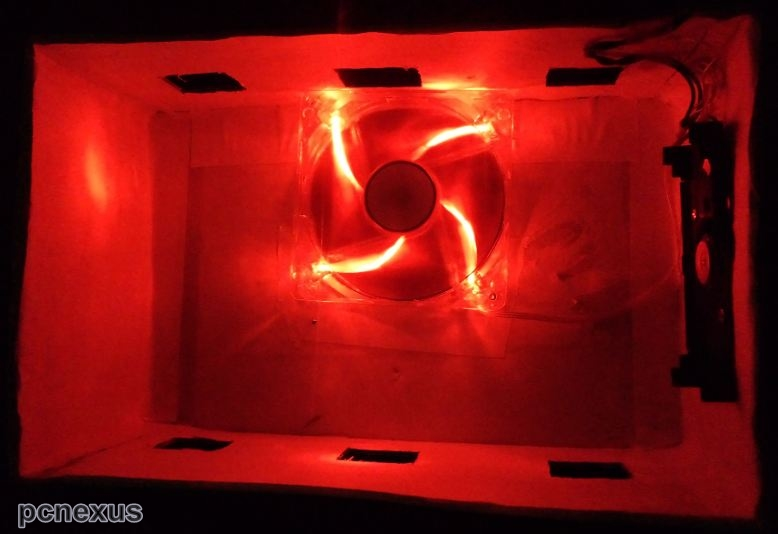 Step 5. Testing
Now after building the laptop cooler you have to check that it is working correctly. Check that the fan is throwing air above. Hover your hand over the laptop cooler fan and feel the air. If you don’t feel any air on your hand then you have fixed the fan from the other side, which will suck air from laptop which is not good. Re-install the fan from the other side and check whether you are feeling air on your hand. Now you have build your laptop, notebook or ultrabook cooling fan. See the image in step 2, you have to hover our hand over the fan shown in image in step 2.

Step 6. Laptop Lifters
Now you have to make 4 laptop lifters that will lift your notebook a little bit up thereby creating space between the cooling fan and your notebook so that air continues to flow without being trapped. To make laptop lifers follow the steps below.


Working Principle Of My Homebuilt Laptop Cooler
Since I have used two fans, the smaller fan helps to draw more air in the box that is picked up by the bigger fan and thrown upwards directly on the laptop's air vents. The idea behind choosing a box is that a box can trap more air which can't move here and there as compared to cooler master notepal cooling fans. The bigger fan suck air from its surroundings and air enters through the air vents made on both sides of the box. Together dual fans do a great cooling job.

Performance
Before using this laptop cooler the temperature of the notebook is given below. 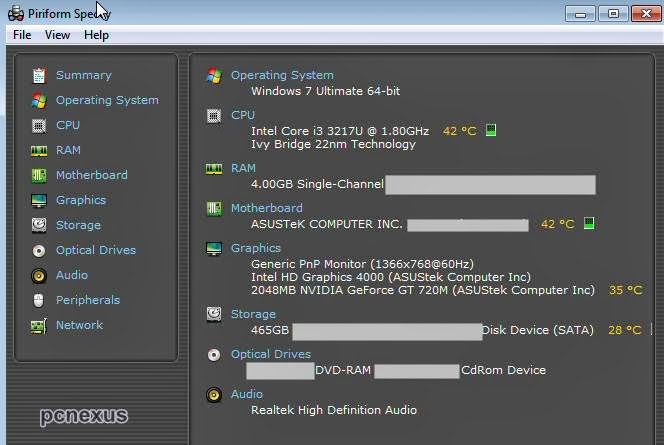 After using the laptop cooler the temperature of the notebook is given below. 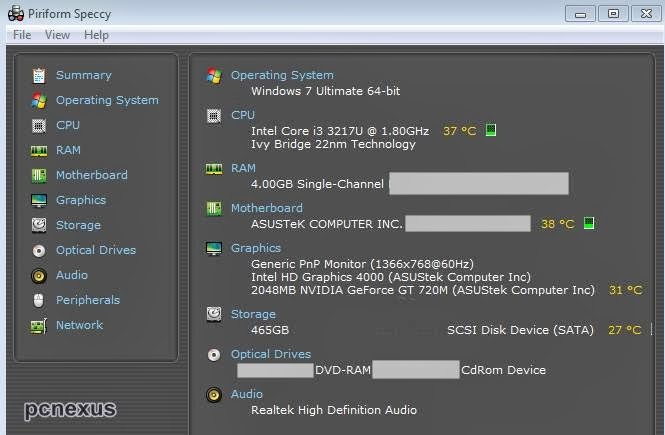 From the above data you can see a big drop in laptop's CPU temperature around 4 degrees and GPU temperature lowers by 3 to 4 degrees. This successfully proves that home built laptop, notebook cooler is working very good and cooling the laptop and saving it from overheating. In my opinion it is the best home built laptop cooling fan for HP, ASUS, DELL, Lenovo, Toshiba laptops, notebooks and ultrabooks.

Check Out The Video
You can watch the video of this home built laptop cooler.