March 21, 2013  windows  No comments
Nokia Lumia 920: The most powerful Windows Smartphone It’s now or never time for Nokia. Their strategy is being watched closely by consumers and industry. Once a numerouno manufacturer, they’ve been outnumbered by the likes of Android and iOS. Nokia has now shifted towards Microsoft’s Windows Phone platform. Though recently, Nokia turned everyone’s head by launching the impressive Nokia PureView 808- having an amazing camera of 41MP, but based on outdated Symbian platform.

Seems like they’ve listened to all concerns and followed it by incorporating a PureView camera into a Windows Phone, which culminated into the Nokia Lumia 920, the successor to the Lumia 900. There’s a lot of excitement for this flagship device – but most importantly, will it actually stir enough noise to entice consumers to buy it? Considering that it’s attached with a very attractive $99.99 on-contract price point, it would seem as though the Lumia 920 will have enough of the prized elements to make it the runaway Windows Phone 8 smartphone to own at the moment.

Design and Build
Distinctively a Lumia handset, there’s nothing particularly new about the design of the Lumia 920, as it maintains an almost identical figure to its predecessor Lumia 900 model and comes in polycarbonate unibody. It also comes in various colors like black, white, yellow and red. The back is wisely curved, which gives a much nicer feel to it, when phone is being held. The phone is pretty heavy at 185 grams. And as such, it's a handset you notice when you drop it in your purse, shove it into a pocket, and casually lift it off a tabletop.

The Lumia 920 has the typical trio of capacitive Windows Phone buttons beneath its display. On the opposite edge, we’ve the usual assortment of characters which include earpiece, light & proximity sensors, and front-facing 1.3-megapixel camera that has the ability to shoot videos in 720p. Looking around the trim of the handset, the left edge is completely barren, but on the right, we’ve the power button, volume control, and two-level shutter key are placed near one another. Meanwhile, the top trim is houses the microSIM slot and 3.5mm headset jack. On the bottom edge, there’s a speaker grill with the microUSB port also there for charging and data connectivity.

Display
Lumia 920 impresses with its larger 4.5-inch IPS LCD PureMotionHD+ display having a resolution of 1280 x 768 pixels. This equates to a pixel density of 332 ppi – which makes it one of the most detailed screens in the market of Smartphones.

Unlike other popular phones and even its predecessor having AMOLED screen, Lumia 920 has IPS LCD screen. Even then, the natural looking color comes good on the screen and it has good viewing angles. Also, the display is clearly visible in outdoor conditions with the sun present. One awesome thing about it screen is that it has supersensitive technology which allows even to use gloves over your hands. 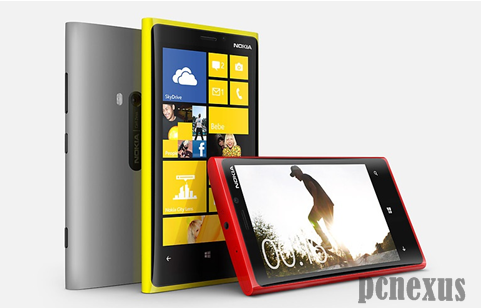 Hardware
The Lumia 920 is power-packed with 1.5GHz dual-core Snapdragon S4 processor, 1GB of RAM, 32GB of onboard storage (no external memory and internal memory is only around 27GB available on boot), NFC (Near Field Communication), Bluetooth 3.0, WiFi.
The Snapdragon S4 processor is superfast, helping the OS to be quick in launching apps and games.It’s also said to be very nimble with the battery (2000 mAh) due to which battery life on the phone is decent. The performance of the battery willneither set any records for longest running hours nor will it send you running for a charger every few hours.

One of the biggest features of Lumia 920 is undoubtedly the wireless charging. Wireless charging pad (and other accessories) makes getting a quick charge out of the phone effortless. By just tossing the phone down on the pad, the device starts to trickle charge away. While it is not as fast as straight USB, it is more than enough to get a quick boost to the device. The wireless charging pad has no internal battery, which means you never escape the wires and have to plug it in. However, the benefit of a charging pad is that you can hide the wires, say behind the computer monitor at your desk, or on a countertop in your home. The charging pad will only draw a charge when you set down your phone. The result is a set-it-and-forget-it situation where you can drop the phone on the charging pad without rummaging around for chargers or taking the time to plug and unplug cable.

OS and Apps
The phone is based upon Microsoft Windows Phone 8 platform. To recap, the OS comes with the NFC features ‘Tap + Send’ to share content, a wallet, Kid's Corner, resizable live tiles and new colors, camera "lenses," Office 2013, and support for cloud content-syncing to another Windows 8 device. But, if there’s one other serious reason to consider the Lumia 920, it has to be the apps. Nokia has created a whole ecosystem of super useful tools that greatly differentiate Lumia from other Windows Phone’s and even other platforms.

Nokia Drive+ Beta is an all-in-one GPS navigation system that works with Nokia Maps. It allows offline navigation by downloading whole maps for states, greatly speeding up the experience. Those offline maps are shared between Maps and Drive+ too, reducing redundancy.
Nokia Music allows you to download a few hours’ worth of music playlists, an incredible value even if you already have Xbox Music.

City Lens is Nokia’s augmented reality app - also a Lens now in Windows Phone 8. You simply hold your phone up in public and it will show you where food, bars, attractions, etc. can be found. It’s a little bit gimmicky and might not be that useful in practical situations.
Nokia Transit is also a location tool that helps you get from one place to another using public transportation. Whether you are in trains, buses or subway the app is quite handy when you’re in a new city.

PureView Camera
A lot has been talked about the 8.7MP PureView camera with Carl Zeiss Lens on the Lumia 920. Nokia started this technology with the Nokia PureView 808 phone, and Lumia 920 has taken it to another level with superb low-light performance. The secret is a combination of various technologies like backside illuminated sensor (BSI) and optical image stabilization (OIS). BSI sensors let more light in from the lens, making scenes brighter; OIS helps steady the camera by having “springs” around the housing allowing you to take longer exposures.

Conclusion
The Lumia 920 is the pinnacle of Nokia engineering. It has good build quality, has the latest technology and it also looks nice from outside. Though there are few issues with the hardware, but if you’re comfortable with Windows Phone 8, this phone is your best option. The PureView camera, while not perfect, gives outstanding night photos and shoots the best video of any phone on the market today. The plethora of Nokia software like Nokia Drive and Music only sweetens the deal.

About The Author
This is a guest post from Julia.She wrote several tech posts for 91mobiles.com.91mobiles is the one stop destination for comparing mobile phones.You can view the details of Nokia Lumia 920 and avail best low price.